Since the Canadian Armed Forces and Veterans Affairs Canada released their Joint Suicide Prevent Strategy, organizations have collaborated to ensure this serious topic continues to be discussed, researched and advanced. CIMVHR is one of those organizations. With an extensive network of researchers and the capacity to build collaborative working groups, CIMVHR took the initiative to lead a roundtable discussion with experts in the field.

On May 23, 2018, CIMVHR hosted its first roundtable in Ottawa to bring together academia, military members, Veterans, public safety personnel, their families, and public and private sector organizations to discuss suicide prevention. The success and outcomes of the first roundtable led to a second that took place on May 9, 2019, titled Whole-of-Community Approaches for Suicide Prevention in Serving Military Members, Veterans, and Public Safety Personnel: Leading by Example. Canadian experts in military, Veteran and first responder suicide prevention worked alongside community stakeholders from these populations to continue the discussion on suicide prevention. The areas of focus for the event were: helping organizations develop a rigorous evidence base for safe and effective suicide prevention programs and sharing promising suicide prevention tactics and strategies, while engaging community leaders who deal with military members, Veterans and public safety personnel daily.

The second workshop's outcomes highlighted a wide range of roles for researchers in supporting the development of community-based peer-group suicide prevention, such as:

CIMVHR continues to work with its network of stakeholders to explore how community-based peer support organizations can move forward with evaluating their efforts to ensure that suicide prevention research can be made more widely available. 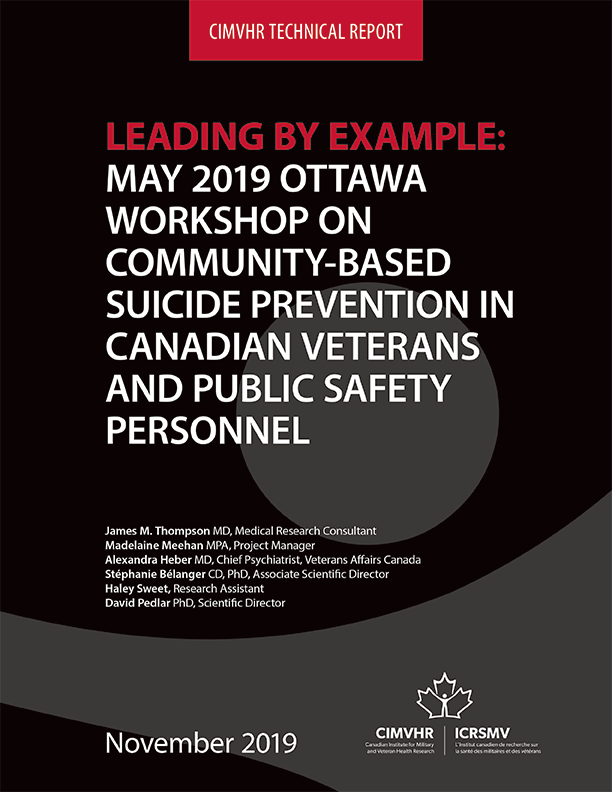